Wuhan Goes Into Lock Down, Rescuers Rush To Save Abandoned Animals Trapped In Their Homes

Discover more about Wuhan Goes Into Lock Down, Rescuers Rush To Save Abandoned Animals Trapped In Their Homes. 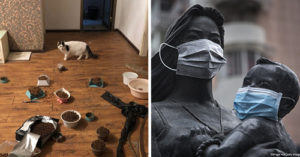 Volunteers with over 10 rescues are rushing against the clock to save the helpless animals left behind from the recent Coronavirus outbreak in Wuhan. With many citizens unable to bring their pets along, this left up to 50,000 pets trapped in their homes without any help.

The recent Coronavirus outbreak has affected the lives of not only the citizens of Wuhan, but also the local fur babies. Being at the epicenter of the health crisis, many Wuhan citizens planned to leave their homes in the days leading up to January 23rd, with the hopes of the mania settling down in the days to come. While this can’t be said for all the families involved, many families left several bowls of food for their pets in the belief that they would only be away for a short time.

As the threat of the Coronavirus began to grow there was an official travel ban set on the city of Wuhan. While this prevented travel outside of the city, this also prevented many of the 5 million citizens that had evacuated from entering the city again. The city has been on lockdown since January 23rd to help prevent the spread of this illness and has left thousands of pets trapped inside of their homes with a dwindling supply of food and water.

Animal rescues in the area estimate there are at least 20,000 to 30,000 animals trapped in and around Wuhan with no one around to feed them. Since the city of Wuhan has gone under mandatory lockdown on the 23rd, volunteers with local animal rescues have helped to save near 3,000 animals.

“We work around the clock, from 8:30 a.m. to 7:30 p.m. When we return home, we have to make phone calls with people who need us to help the next day. We go to bed after midnight. Most of the owners have some spare food at home, so we just go to their homes and pour a 10-to-15 day portion. If their food is insufficient, we will provide our own food.” – Du Fan

While most of their requests have involved assisting dogs and cats that are in need of feeding, they have also received requests for help with reptiles, rabbits, birds and mini pigs. Multiple rescues are following up on the thousands of requests that pour in each day, and are working day in and day out to help as many animals as they can. Some rescues even knocking down doors to provide aid to the dogs and cats inside.

“Some owners’ doors are password-operated. Some of the doors have to be opened by locksmiths. For emergency cases, we enter the house by breaking down the front door or climbing in through an open window. Luckily, there have been no accidents during rescue attempts.” – Member of Wuhan Pet Life Online

While it’s difficult to understand how anyone could leave their pets behind in a situation like this, it’s clear that many of the Wuhan citizens were simply unaware of how severe this situation would become. One of those among the concerned fur parents was Chen Yi, a Wuhan Citizen that was interviewed by NBC news on his reasoning for leaving his pets behind. Chen explained how he left his home in the first stages of the Coronavirus outbreak to check in on his family in a neighboring province and had no idea that he would not be allowed back in the city.

“I left around two pounds of food, enough for a week for my pets before I left Wuhan. I was very concerned about my pets when I discovered Wuhan was sealed off and had no idea when I could come back. My pets are just like my friends. I felt like my friends were trapped and I couldn’t leave them there to starve. I had to try everything to save them.” – Chen Yi

Chen Yi was lucky enough to find a friend in the city to feed his beloved pets, but many Wuhan citizens weren’t as lucky. So many lives currently depend on the dedicated volunteers within Wuhan, and we are so grateful to each and every person who has assisted in the rescue process.

The post Wuhan Goes Into Lock Down, Rescuers Rush To Save Abandoned Animals Trapped In Their Homes appeared first on iHeartCats.com.