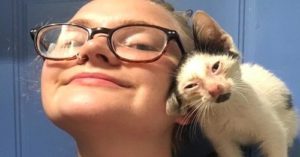 Having grown up in Ireland, a nation known for its kindness to animals, Laoisen Doyle was shocked by the number of cats on the streets of Athens, Greece. While living there last year, one kitten in particular caught her attention.

The pitiful creature was hiding beneath a trash can. Skinny, sickly, and covered in parasites, Doyle knew it could not survive without her help.

“He wasn’t moving, and his eyes had fused closed,” she told the Irish Post. “He was breathing though his mouth because his nose was so crusted with mucus. I didn’t even realize he had a white nose for a good while after I took him home.”

But the kitten who would come to be called Zuko was feistier than Doyle expected! When she tried to catch him, he bolted into an abandoned lot.

“He eluded me for about an hour, during which time I called my mother, who works with the Renvyle Animal Rescue in Connemara and I decided to come back for him the next day when I could be better prepared.”

This time her efforts were successful, but before taking him home, Doyle decided she better check with the neighbor living next to the lot. Not only did he confirm that the kitten had no owner, he tried to discourage her from rescuing it.

“Like my coworkers, the man who answered said that it was a dirty stray and not to waste my time,” Doyle said. “He actually said ‘this is just a disgusting street cat. Go get a proper animal’  and I took that as a sign that I was his only hope.”

To Doyle’s surprise, the local vet estimated Zuko’s age at around three months. Due to his respiratory infection and life on the streets, he was extremely underweight.

Once again, Doyle was struck by the callousness of peoples’ responses to her kitten.

“Everyone was so mean to him– while the vet was examining Zuko he turned to me and said ‘You know, your cat is very stinky’, and I was like ‘Yeah I know. I carried him here in my hoodie, I am very much aware of how bad he smells.’ But he got his vaccinations as well as ultra nutrients, worming tablets, eye drops, antibiotics… Just everything. And he started to get better.”

Soon it was time to head home to Ireland. Doyle feared it would be difficult to travel with Zuko, but the trip was surprisingly easy!

Once home in the beautiful Connemara countryside, Zuko really began to thrive. His respiratory infection cleared and he began to put on weight. Instead of alleys and dumpsters, he had fresh grass to romp in and seaside air to breathe.

Today Zuko is unrecognizable from the pitiful kitten Doyle rescued in Athens. He is strong and lanky with a glossy coat and unique markings on his head and face. Doyle jokes that the patch of black hair directly on top of his head is his “emo fringe.” And then there’s his perfect goatee!

Zuko is one lucky kitten to have crossed Doyle’s path at just the right time!