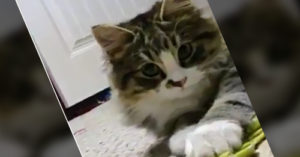 On a snowy walk for a good cause, a Prairie Heights, Alberta, man found an unlikely friend.

The month of November hosts various initiatives for health, one such cause being Movember. It was for this cause Max Adams trekked over snowy ground on a cold day this past November. On what equated to a 37-mile journey to Winagami Lake, Max moved through the first few miles no problem, a little chilly maybe, but good overall. Until, he heard a meow for help in the snow.

Looking around, Max found the crying kitten in a tree, walking the branches back and forth, desperate to get his attention.

“He would have leaped off the branch onto me,” Max told CTV News. “He wanted and needed somebody.”

Max scooped up the kitten where the tabby promptly settled on his shoulder. The cold baby stayed there for most of the walk. Max said, “Every time I put him down, he would just follow behind me.” 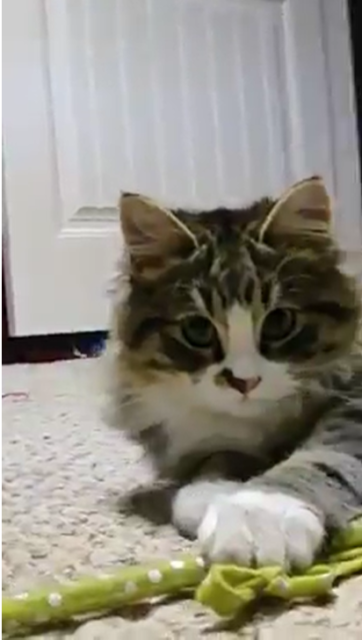 “I’ve had a few cats in the past but never like this… He’s just so friendly and very personable.”

Brought Together for a Purpose

Over the next couple of days, Max returned to the spot the kitten found him and searched for the tabby’s family. When no one claimed the cat, Max took him to the vet. He’d noticed a red spot on the kitten’s tail and all the fur around it had fallen out.

The vet diagnosed the spot as frostbite and infection. To keep the infection from spreading over the little kitten’s body, his tail had to be amputated. Hearing this, Max asked if the kitten could be neutered as well. By this point Max had pretty much decided the kitten had chosen him as his family. “This guy just has so much personality. He won me over. It was kind of a no-brainer.”

Max also reported that since posting the original video of the pair’s meeting, the kitten has helped raise extra funds for the Movemeber cause,”It’s been a blessing in disguise in many ways.”

On Facebook, Max hosted a poll to name his striped buddy. Just right for a kitten that hitched his way to security.

In the video reveal of little Hytch’s name, Max and Hytch had some fun with the kitten’s docked tail… 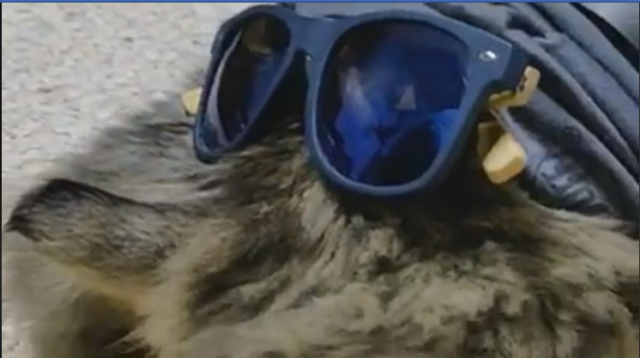 Here’s the video in entirety for a laugh…