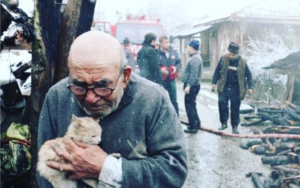 Video footage of an elderly Turkish gentleman weeping and clutching his beloved kitten as his home burns to the ground has gone viral.

83-year-old Ali Meşe, from Ordu Province in the Black Sea region of Turkey, accidentally started a fire while trying to light the wood stove in his living room with gasoline.

Ali and his family escaped the blaze without serious injury, but their home was a total loss. Images of Ali and his only surviving cat – a ginger kitten named Sarikiz (which translates to ‘Blonde Girl’ in English) prompted sympathy and support from across the globe for the family.

A GoFundMe page has raised more than $7,000 for the Meşe family and according to the UK Daily Mail, “a team sent by the Bolu Government is also preparing the new house for the pensioner.”

At the time of the fire, the life-long cat lover had a “handful” of felines living with him as well as 14 hens. Sarikiz and one hen were the only animal survivors.

Ali spent one night in the hospital undergoing treatment for minor burns to his right hand. Upon his release, the ecstatic man was reunited with his beloved kitten.

The post Footage Of Elderly Man Clinging To Kitten As His House Burns Garners Worldwide Support appeared first on iHeartCats.com.