Discover more about FIV was Almost the End For This Grey Lady – Until She was Given a Way Out. 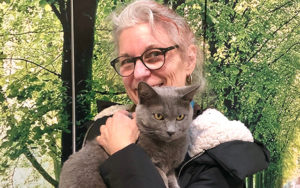 Chloe Mae is a one-year-old, beautiful grey lady. After discovering she had tested positive for feline immunodeficiency virus, she was slated for euthanasia at an intake facility in Alabama.

Thanks to a grant from GreaterGood.org, funded by the iHeartCats.com community, Felines & Canines Rescue Center was able to save Chloe Mae and relocate her on transport to Felines & Canines in Chicago where she was made available for adoption on Friday, March 8, 2019. Less than 24-hours after arriving at Felines & Canines, Chloe Mae is on the way to her new forever family! GreaterGood.org and iHeartCats are working together to give pets like Chloe Mae a second chance! When you purchase Second Chance Movement items from the iHeartCats store you’re funding trips to safety for pets in high-risk facilities!

The post FIV was Almost the End For This Grey Lady – Until She was Given a Way Out appeared first on iHeartCats.com.