Discover more about Feminism and cats.

Women and cats do seem to have a magnetic attraction to each other. 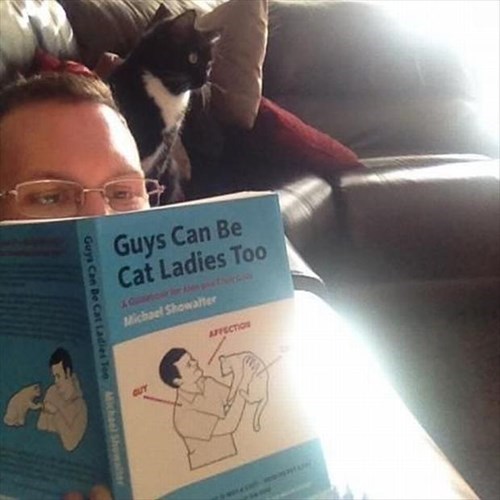 Part of this folklore probably got started from cultural gender roles, and how this interacts with the cat’s nature. Women have strong instinctive and socialization drives to work in communal ways, and this is also how cats work.

But I see another commonality at work. Both women and cats are victims of prejudice.

Maybe it’s because I’m a woman, who loves cats. But hardly a week goes by that I don’t notice a glaring bit of nastiness thrown around like it is real.

Getting Over Rover: Why Our Grief Over a Dog Is So Intense

Dog owners score higher on measures of well-being and, on average, they are happier than people who own cats and those who own no pets at all.

There you have it. Having cats is like having no pets at all.

From the neurotic women and cats who fill the works of the highly unscientific Stanley Coren to the routine dismissal of Cat Appreciators as pathetic and deluded, women and cats routinely get no respect.

So women who love cats? I guess that winds up as negative respect.

Anyone who does not acknowledge some deep-rooted sexism in North American society… hasn’t been paying attention.

A Twitter thread has gotten some attention recently, where my former-coworker/current-best friend, Marty, recounted the day he realized just how bad, and insidious, workplace sexism could be.

After noticing that a client was treating him like crap while his email signature was accidentally set to my name, we came up with an experiment. We switched signatures for a week. Nothing changed, except that our clients read me as male and Marty as female.

I had one of the easiest weeks of my professional life. He… didn’t.

Likewise, cats deal with a lot of anti-cat prejudice as they are routinely reviled for qualities which only exist in cat myths, not in reality.

Cats have been experiencing a surge of popularity as Youtube lets people who don’t have cats become aware just how cute, interesting, and affectionate they can be. Prior to technological advances, one would have to actually have a cat relationship to know these things, because cats hide this side of themselves unless they trust the humans around them.

As seen in my post, Cat Etiquette Rules, people who don’t understand cat etiquette will draw the wrong conclusions and make all the wrong moves. Unable to understand they have only themselves to blame, they continue to believe cats are just not very friendly.

Cat videos, on the other hand, mostly show just how wrong those cat myths are.

As someone married to a Cat Guy myself, I am cheered by the growing acceptance of cats as delightful pets for almost anyone. I write about cats with children and cats with seniors and cats with challenges and how cats can be great for people with challenges. Because cats have a lot of advantages that aren’t generally acknowledged.

For people who can’t get out much, they are thrilled to be with their person at home, even if they can get out on leashes, too. Dogs, especially young or high energy dogs, require much more exercise than they usually get, and this can lead to coming home to finding the sofa in small pieces. While cats, even high energy cats, can amuse themselves at home with the proper equipment.

For people with societal challenges, the love of a cat can come very very naturally. My post on cats and autism featured helper cats for kids with autism, and there’s no doubt that the social skills of cats can paper over any number of gaps, for people with any range of language and interaction challenges. My outplacement of cats while I had my previous cat rescue often came up with a cat who wanted a single devoted person, and it turned out, there were plenty of people who wanted that kind of adoration.

For people with artistic pursuits, a cat is a natural companion for those long hours at the keyboard, in the studio, or working on some intricate hobby. While cats and knitting is a bit tricky, cats do have those long hours spent catnapping within petting distance. They are happy just being with us; they don’t have to have activity constantly.

I long for a world in which both women and cats are free to be themselves.

And, treasured for it.

More about the cats and feminism connection.

Got here from a Link or Search?
There’s more ways to understand our cat with The Way of Cats than the article you are reading now. See all of my posts on WHY CATS DO THAT.