Discussion: Are Some Shelters/Rescues Making It Too Hard To Adopt Pets?

Discover more about Discussion: Are Some Shelters/Rescues Making It Too Hard To Adopt Pets?. 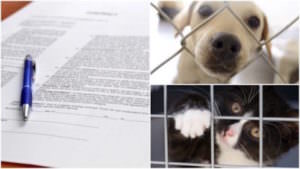 It has become widely known that millions of dogs and cats get euthanized every year (about 7.6 million, to be specific) due to overcrowding in shelters.

As movements and activists urge potential pet parents to “adopt don’t shop,” working to minimize the wasteful death of innocent animals, caring people everywhere have opted to find their furry friends at shelters and rescues rather than pet stores and breeders.

Now that “rescuing” is a popular thing to do, animal shelters and rescues may have more say in choosing who is adopting the pets that leave their care. There’s no doubt that shelter staff have each animal’s best interests at heart. They’ve learned each pet’s personality, perhaps even becoming attached to some, and may have personally nursed them back to health following some awful circumstance. They have a responsibility to make sure their animals remain safe, and that those who have already been abused don’t endure the nightmare once more.

However, there is a fine line between finding  a “good” home for each animal, and waiting to find one that is “perfect.”

At most animal shelters, adopters will fill out an application and sign a contract, promising that they’ll be diligent about providing the pet appropriate care. And that’s good; people need to think about the huge commitment they’re about to take on.

But some applications have become about as complicated as the SAT’s, and request information that’s rather invasive, pertaining to the candidate’s personal lives. Some organizations request preliminary home inspections, while others hold adopters contractually obligated to “surprise home visits” following adoption. Are some organizations making it nearly impossible for candidates to “fit the bill” when it comes to adopting?

“Some rescue groups think potential owners shouldn’t have full-time jobs. Others reject families with children. Some rescuers think apartment dwelling is OK for humans but not for dogs, or object to a cat’s litter box being placed in a basement. Some say no to people who would let a dog run around the fenced backyard “unsupervised,” or allow a cat outside, ever,” reads the article “No Pet For You” on Slate. Of course, there are a lot of variables depending on the family dynamic and the type of animal a candidate wants to adopt. Would a big, high-energy dog do well in an apartment? It doesn’t seem ideal, but what if they’re active enough to make sure the animal gets plenty of exercise? Should an apartment-living candidate be denied, then?

The article goes on to cite some more “out-there” questions that have been asked: one application prompts, “As a dog ages, it often becomes incontinent and arthritic. How do you intend to handle your dog’s age-related problems?” Another inquires, “Are you considering having children within 10 years?”

A news story by NBC Los Angeles tells of a woman who had fallen in love with a shelter dog. Having passed the application processes, she thought the pup was pretty much hers until the day of the preliminary home visit. When the inspector stepped out of her vehicle, before she even reviewed the home, she blurted, “I’m just not comfortable in this neighborhood,” and the dog was taken back to the shelter. In an email exchange that followed, the inspector admitted to the candidate, “I think you’d be good adopters, but I won’t adopt to the neighborhood.”

Even Ellen DeGeneres is not immune to certain strict contractual agreements. After rescuing Iggy, a Brussels Griffon terrier mix, it soon became apparent that he did not get along with DeGeneres’ cats. The talk star host re-homed the pup with her hairdresser, who had two girls–ages 11 and 12–that fell in love with him. When the rescue found out that the contract had been breached (she was not allowed to give the dog away without their consent, plus they typically don’t adopt to families with children under 14), the pooch was taken away from his new family.

This begs yet another issue; who’s to say what is “suitable” or not for a pet? If an inspector walks into a hoard, that’s one thing; but if they deny an adoption simply because the family has a hole in their backyard fence (true story!), that’s certainly another.

It is also worth mentioning that there is no third party to oversee adoption standards. The criteria and complexities of each application is completely up to the organization, and the decision to approve or deny an application is often up to a single person. In a candid piece published by The Dodo, the author, who’d worked at a shelter, remorsefully describes having wrongfully denied an application. A family fell in love with a particular dog and visited him several times. The reason for the denial? Their other dog, a senior, had not been neutered; at his age, the surgery would be risky. The author was truly regretful to find out that the family ended up purchasing a puppy from a pet store, instead.

Being denied adoption for a shelter animal often leaves people feeling disheartened, humiliated, and perhaps causes them to give up on rescuing altogether. When capable candidates are denied adoption, they are left to wonder, “Is this animal really better off in a shelter than in my home?” Ultimately some people looking for pets check out other organizations and end up getting an animal, one way or another. Others turn to a pet store or breeder rather than jumping through hoops in order to rescue.

It must be noted that this is in no way an accurate depiction of all shelters and rescue groups. They, of course, have a responsibility to do the best that they can to make sure that all their animals are placed into safe, healthy, and loving homes.

The question is: at what point does the whole mission of “rescuing”–to find as many good homes for as many pets as possible–become lost when the process becomes too exclusive? We want to hear from you: Is it getting too hard to adopt or rescue a pet, or are these tough applications warranted? Do you have a personal experience with strict adoption standards? Please share with us!