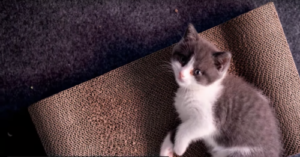 Many pet parents wish their dog or cat could live forever. However, Huang Yu believed that he had actually found a way to allow his cat to keep on living even after he passed away.

Garlic was Yu’s British Shorthair cat. He was only 2 ½ years old when he passed away from an unnamed illness, so of course, Yu was devastated. He didn’t want to go on without his beloved cat, which is why he decided to make an exact clone of him.

Yu felt guilty for not bringing Garlic to the hospital in time prior to his death. He had so many regrets, so he wanted to give Garlic a new chance at life.

Sinogene is a Beijing-based pet cloning company that was able to clone Garlic. They have cloned over 40 different pet dogs before, including the first cloned police dog. However, Garlic was their very first cloned cat.

Cloning cats is a difficult process. The scientists had to inject cells from the deceased cat into an embryo. Then, that embryo was transferred to a surrogate cat.

This surrogate cat carried the kitten for 66 days, and then the clone of Garlic was born through natural birth. However, the scientists needed to observe this clone for a few months first to ensure that he was in good health and not different from other kittens.

Cloning Garlic cost 250,000 yuan, which is equal to about $35,000. Despite being expensive, Yu insisted that it was worth it to get his beloved cat back.

Yu decided not to think of this new cat as just a clone. He simply calls him Garlic because he feels that the cloned cat is just a continuation of Garlic’s life. Of course, he still misses the original Garlic greatly, but he loves the new Garlic just as much.

“I’m so excited to see Garlic again after such a long time,” said Yu.

While cloning a cat will not guarantee perfect results, the similarities between the two cats are usually at least 90%. Therefore, while the clone’s DNA matches the original Garlic, they have slight differences in their eye color and fur. Also, clones sadly will not have the memories of the original, but scientists hope to be able to figure that out in the future.

Pet cloning has been increasing in popularity over the years, primarily in China. Many labs will charge up to $100,000 for a person to clone their dog. Many pet parents agree that this process is worth the cost though.

Animal cloning doesn’t just end with cats and dogs. Chinese biologists have also cloned two macaques, which are the first animals from the primate species to be cloned. Scientists hope to be able to clone endangered and extinct animals in the future as well.

Of course, Yu is a bit disappointed that Garlic is not exactly the same as he once was. However, he’s still overjoyed to have his furry friend back in his life.

Cloning is still new technology, and raises a lot of questions and complaints among pet lovers. Some feel that it’s playing God. Others believe that cloning a pet that has already lived a happy life leaves other pets without homes.

Tell us what you think about pet cloning on Facebook.