To perform with confidence becoming a cat, the cast of Cats had much work to do in learning how to channel their inner feline. Bringing out the cat from deep within proved challenging, but James Corden of The Late Late Show hosted a cat class to help his costars coax forth their wild instincts. 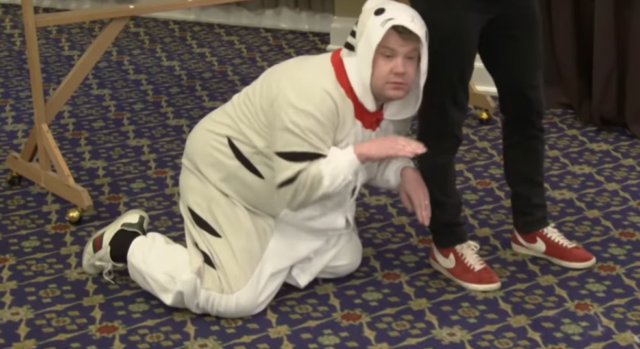 Oh! It wasn’t really a kitty, but James Corden acting in a most convincing cat manner. He stunned the class with his amazing feline performance. Of what he expected from his students, he told them, “that’s the level.”

Attendees expected a day of fun, but Corden had rigorous training for the group, which included chasing laser pointers, a big ball of twine, and a giant mousie. 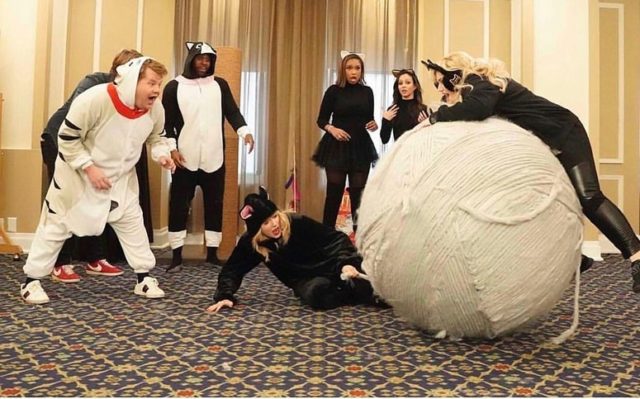 Rebel Wilson earned points for ignoring Cordon’s commands, because that’s what cats typically do. Then, she lost ground for the “Best in Show” award by refusing to go through the cat door. She turned the doorknob and went right through on two legs, impossible as most cats don’t have thumbs. 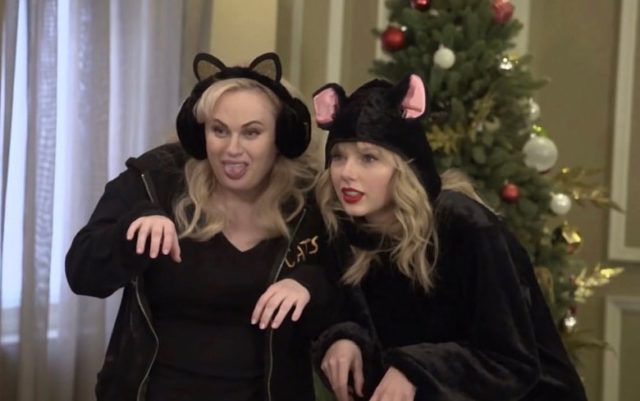 Swift found herself in hot water over sipping from a water bottle. Cordon pointed at a giant saucer of milk, directing any refreshment comes from a bowl, not a bottle when it comes to cats. Rebel distracted James and spiked the saucer because she proved to be the naughtiest kitty in the bunch.

On drinking from the saucer, a chagrined Swift said, “I was just recently named Artist of the Decade but after people see me lap up milk from that giant saucer, I’m pretty sure they’ll take that away.”

Gone to the Dogs

When a dog was brought in for “nemesis” practice, the pseudo cats hissed and slung insults at the dog. When Francesca couldn’t be mean to the shaggy dog, James dismissed her for being a poor cat. One down in the “Best in Show” running, but it was quickly growing safe to assume Rebel was out of the running too thanks to her mischievous behavior.

Derulo certainly kept himself in contention when Corden sent him to the litter pan for a bathroom break. Corden lamented the decision though, asking about air fresheners as Derulo kicked around in the litter.

But Only One ‘Cat’ Can Win

The man behind the musical genius of Cats, Andrew Lloyd Weber, arrived to handout the “Best in Show” award and a lifetime supply of Meow Mix. He was welcomed in a chorus of cheers and meows. After a grueling day of catting,  Jennifer Hudson took the top prize, gushing “I can’t believe it. I won an Oscar for Dreamgirls, and now I’ve won best in show for being a cat. I mean, where do I go from here?”